Solar Watches: All You Need To Know

If you are looking for a sustainable yet traditional timepiece, then you can’t go wrong with solar wristwatches. Although they have been around for quite a while, solar watches have gained a lot of popularity in recent times due to their ‘eco-friendly’ tag. Compared to quartz watches, the major USP of solar watches is that you don’t have to worry about the batteries running out. Also, there are ample options available when it comes to solar-powered watches for men and women, which is one of the reasons why it has become the newest fashion trend.

Before we get into this fashion trend, let’s learn what a solar watch is.

The first commercial use of solar wristwatches started in the year 1972. A solar watch runs on a solar cell which absorbs energy from the sunlight through the solar panel. It is a man-made invention that runs on natural energy and has a rechargeable battery. It is eco-friendly so it doesn’t cause any harm to the environment. Also, while it works like any other battery-operated wristwatches, the only difference lies in the energy it uses.

Below is a brief detail about solar watches to help you get an idea of why solar-powered watches are a must-have accessory in your watch collection.

A] History of a Solar Watch?

By the early 1970s, quartz movements had won out some of the early technological approaches to producing electronic watches giving rise to the era known as the Quartz Crisis. The first commercial use of solar wristwatches started in the year 1972. Roger W. Riehl, a talented American engineer, developed a solar watch out of his house.

He named this watch the Synchronar 2100, which was considered a luxury product, and struggled to compete in the market against the cheaper and more accessible quartz-powered watches. However, the model has set the stage for various other brands in the future that would utilise solar technology in watch movements when its cost decreases and production capacity increases. Today BERING offers solar watches in the relative niche arena of solar-powered watches.

B] How Do Solar Watches Function?

Solar-powered watches are quite popular, but the main question arises how do they work?

Simply put, these watches work by capturing storing and converting light energy into electrical energy through conventional solar panels. Earlier solar-powered models that cells that faced the sun, either on the top of the case or on the dial. Today, the solar cell is placed under the dial. These light-powered watches also work in the dark as they use rechargeable batteries that store energy, which ensures it works for a longer time.

Here are some of the advantages of wearing a solar-powered watch.

Here are some fantastic options that you can consider if you want to purchase a solar-powered BERING watch. These solar analogue watches for men and women are chic and stylish and suitable for all occasions – be it a festival, a casual outing, or an office meeting. 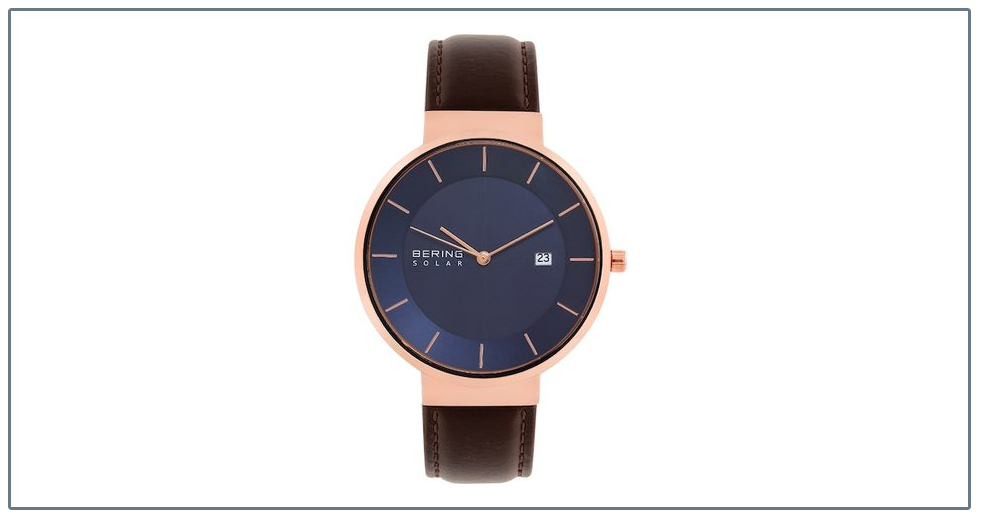 If you are looking for a formal watch that makes a bold statement, then this analogue watch is just what you need. It is a classic watch design for men and a must-have accessory in your watch collection. This best-selling solar-powered watch features a stainless steel case that is complemented with a calfskin leather strap. The dazzling blue dial looks especially striking and also has a small date window.

It is available in four different colours – black, grey and blue with a bandwidth of 18mm and case diameter of 39 mm. The best part is the scratch-resistant sapphire crystal. Plus, this watch comes with a water-resistant capability of up to 50 meters. 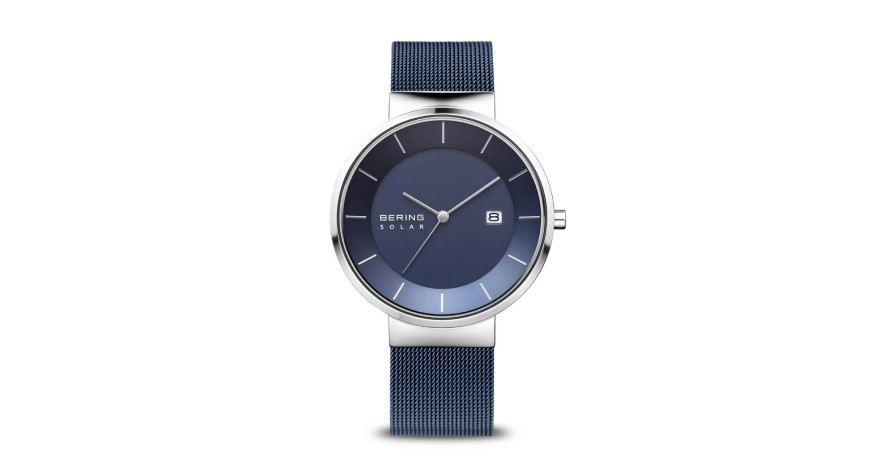 Part of the limited solar watch collection, this watch is one of the best luxury watches for men by BERING. Its contemporary and minimalistic design makes it the most trending timepiece that is sure to make a great first impression. Featuring a vibrant blue scratch-resistant sapphire crystal in a silver-polished stainless steel case, this analogue watch runs on clean energy and comes with rechargeable solar-powered batteries.

Once fully charged, it can run for 6-12 months, even if stored in complete darkness during this time. It features an analogue display with a date window. The bandwidth and case diameter are 18mm and 33mm respectively and the watch also comes with a three-year warranty.

It has up to 50 meters of water-resistant capability, whereas the Milanese strap not only looks dapper but also makes wearing the watch for a longer time more comfortable.

From our exclusive Charity collection, this radiant green analogue watch for women is exceptionally elegant and simply splendid. Its unique green dial not only gives it a distinctive look, but it is also eye-catching with a hint of sophistication. Its rose gold-coloured stainless steel case gives it a further edge while the scratch-resistant sapphire crystal ensures that you can wear it for all occasions.

It is lightweight, weighing 0.400 kg, with a bandwidth of 10mm and a case diameter of 31mm. It also comes with a three year warranty. So, if you’re searching for a sleek and graceful solar powered watch in India for your loved one or yourself, then this watch by BERING is the perfect gift.

If you are searching for a sleek and graceful timepiece for your loved one or yourself, then this watch by BERING is the perfect gift. Also, the rechargeable batteries ensure that this timepiece will last for the longest time with zero to minimal maintenance. 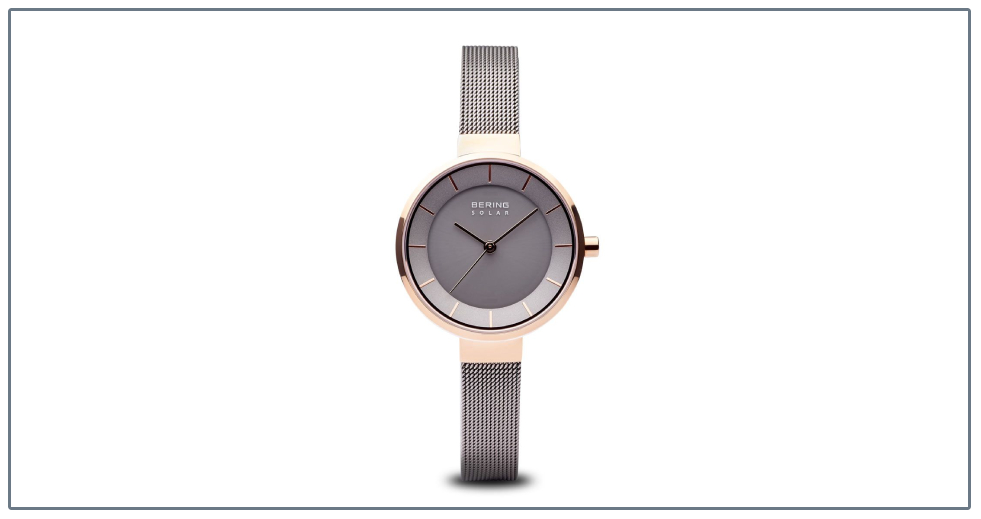 This eco-friendly watch from our solar-powered collection is a show-stopper that is beyond captivating. The subtle grey colour ensures that the watch complements well with almost all outfits – ethnic or western. Its water-resistant capability will protect it from accidental splashes, whereas the scratch-resistant sapphire crystal gives this exquisite watch a resilient appeal. What’s more, the rose gold stainless steel casing with the slim Milanese strap is the icing on the cake of an already impressive timepiece, thus making it the best solar watch for women by BERING.

With changing times, you need to upgrade your fashion style if you want to look your best at all times. However, solar-powered wristwatches are timeless timepieces that would never go out of style. Be it for formal wear, casual wear or festive wear, solar watches are well-suited for all occasions. They are energy-efficient, sustainable and environment-friendly. They are also an asset and a great investment that can be passed down through generation as memorabilia.

The best part, solar-powered watches get recharged on their own every time you step out of the house. Plus, they function smoothly and has the longest shelf-life. You can read through our blog on how to choose the perfect watch for your hand size if you are unsure which wristwatch is best suited for you. This will help you to make an informed choice.

Our limited collection of solar watches for men and women are exceptional masterpieces with guaranteed durability.

BERING Time watches are known for their minimalist Danish design that is inspired by Arctic beauty and Northern Lights. Our limited collection of solar-powered watches for men and women are exceptional masterpieces with guaranteed durability. Thus, check out our collection of Solar watches now and make a purchase today!

The Luxury of BERING’s Rose Gold Watches For Women

Rose gold watches are truly majestic and have a glowing aura that compliments well with most outfits. They are every woman's favourite ...

END_OF_DOCUMENT_TOKEN_TO_BE_REPLACED

Be the first to learn about our latest trends and get exclusive offers
* Terms And Conditions Apply.

Sidebar
Start typing to see products you are looking for.
Shop
0 items Cart
My account
×